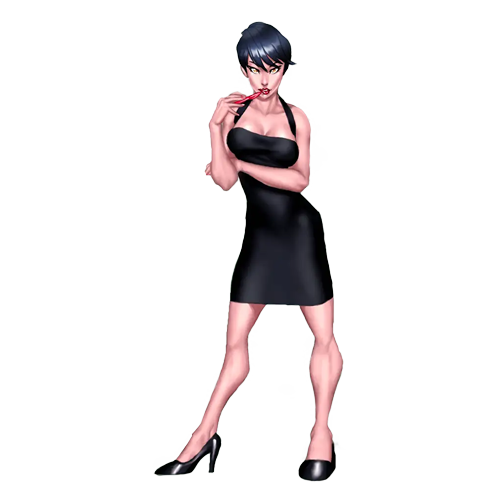 Toki Mizushima was born in New Japan to humble beginnings. She comes from a large family of eight kids, her being the sixth child born. Coming up, there was not much to go around when it came to food, drinks and resources. The kids all wore hand-me-down clothes and shoes. Nothing they owned was even remotely new. The kids also worked odd jobs starting at the early age of six to help bring in extra money, as their mother was disabled with a bad leg from a car accident, and their father was a little known blacksmith. He worked making steel utensils mostly, but every now and then he would make katanas (Japanese swords) to honor his ancestral roots which stemmed from ancient samurai clans in the old country. It was one of these swords that would afford Toki and her younger siblings a bright future.

Toki is an incredibly intelligent and savvy CEO. She also has limited combat training and extensive training with katana swords.

With her five elder siblings moved out and making ends meet on their own, Toki took over responsibility for taking care of her younger brother and sister. As a part of this, regular training with her father became a staple in her weekly activities. He taught her how to fight and use a sword. Toki took to the training incredibly well, and became proficient in both. Then, a month before her 14th birthday, Toki was seen practicing her sword skills in an alley by a member of the legendary Iga Ninja Clan.

The ninja (dressed as a civilian businesswoman at the time) approached Toki and asked about the magnificent blade she wielded. The teenager answered that her father made it, and gave the stranger a sales pitch she wouldn’t forget. The undercover ninja told her she would see her again and walked off. A few days later, the ninja returned with a suitcase filled with $100,000 in cash. She asked Toki’s father to make four straight-edged katanas. He agreed and forged the most beautiful, elegant and lethal swords he’d ever made. When the ninja returned to obtain them, she was blown away by the craftsmanship and thanked Toki’s father before delivering another $100,000 and leaving. The future of the Mizushima family was changed forever.

After the deal with the ninja, word spread throughout New Japan of the brilliant blacksmith who forged weapons of magnificence. People paid top dollar for his weapons and items, and this allowed the parents to help their remaining three kids finish high school and go to college. Toki was accepted into the prestigious Platinum City University, where she double majored in Business Administration and Economics. She also obtained her Masters from PCU. When she finally graduated at the age of 25, she was hired full-time from her internship at Lockhart Holdings (LH).

Her salary was six-figures and the benefits were incredible. She loved her colleagues, her job and her life. However, all that changed when she learned of whispers regarding rumors surrounding illegal experimentation and violent corporate takeovers involving numerous subsidies of LH. Toki began to question the integrity of her employer. The final straw was learning that the owner of Lockhart Holdings, Edgar Lockhart, had personally set his sights on Ando Associates, Inc. (AAI) immediately after the founder and his wife were killed in a mysterious car accident.

Toki witnessed the ruthlessness and underhanded strategy of Edgar and decided she could no longer work for a man like that or his company. Furthermore, the founder of AAI had always been incredibly generous to the needy in New Japan, always offering millions of dollars in aid and technology for access to clean water, additional food programs, and academic scholarships. Her family benefited from all those things. Thus, it was a no-brainer for Toki. She quit LH and joined AAI.

Toki possessed knowledge of LH that was integral to the success in staving off the hostile takeover. The deceased founders’ son, Miyamoto Ando, became the new owner and CEO of AAI. Miyamoto is also known to a select few as the samurai superhero Musashi. To show his gratitude, he instantly rewarded Toki with a portion of AAI stock, and gave her a promotion to Assistant Vice President of Finance. Toki would work her way up over the years, eventually being appointed by Miyamoto to CEO after he secretly decided to dedicate his life full-time to being a superhero. He would still be consulted on all major decisions as owner of AAI, but his main focus was on cleaning up the streets of New Japan and Platinum City.

Toki’s tenure as CEO grew into one of great success, and she remained firm as the leader of AAI directly under Musashi. Holding this position of power also eventually led her to meeting a certain super soldier one day by the name of Lt. Rashard Bonds.

After attempting to recruit the bratty rich vigilante, Kid Gen, to join his squad of superheroes, Lou decided to quit seeking out unknowns for the time being and go straight to proven warriors. So, he went to AAI’s headquarters to recruit the man who had fought side-by-side with noted heroes Captain Noble and Shuttershock in the past: Musashi. When Bonds arrived, however, he met Toki instead.

The CEO invited the soldier into her office. Lou saw magnificent weaponry on display amidst the luxurious decor. They were made by her father, a fact she was proud to share. Lou inquired if she was trained in using any of them, to which she replied she most certainly was and then joked she would demonstrate for him if she didn’t like what he had to say during his unannounced visit. Lou chuckled, even though he sensed Toki was confident in her abilities, and proceeded to say he had a personal matter to take up with Miyamoto. Toki pressed a button which locked the door and tinted the windows dark. The conversation was about to get very candid.

Toki opened up a file and began reading Lou’s academic and military achievements. She did not have all the details, but she knew the gaps of activity in his service time meant he was away on black ops missions. Lou was surprised but kept his composure. Toki, realizing her extensive and immediate background check performed from the moment he spoke with the receptionist 22 floors down in the lobby did not invoke a reaction, cut straight to the chase. She asked Lou what the US military wanted with Musashi. That was when Lou tipped his hand and revealed being surprised.

He asked Toki how she knew he was seeking the superhero, and she answered the only reason a soldier of his caliber with hyper-abilities would be inquiring about Miyamoto Ando was if he needed her boss’ help with something as the hero Musashi. Lou realized there was no point in being coy, so he divulged his plan to create a team of heroes to help protect the world against an impending doom. Toki required more information, stating she would not roll over so easily and provide him with access to Musashi. All Lou could share was what he knew, which was that they received a prophecy from an ancient monk named Hosho and it was imperative a great line of defense be formed immediately. That was not the answer Toki desired, though, so she pressed the button and told Lou he could exit her office as the windows untinted around them and the door opened. Lou made a comment on his way out, saying the only way the world could protect itself from unknown threats AND known ones like Edgar Lockhart was for this team to be assembled. The CEO was now fully intrigued.

Toki stopped Lou and inquired why he mentioned Edgar. The soldier replied he was not only looking to stop whatever evil was coming, but also the evil that already existed. He said his friend, Captain Noble, believed Edgar to be extremely corrupt and potentially involved in the bringing forth of the looming global threat. Toki believed every word having worked for Edgar in the past, and agreed to arrange for him to meet Musashi. Lou thanked her and began exiting once more. As he did, Toki remarked that though he never mentioned it, she knew Lou had knowledge she used to work for LH and would most likely agree to help bring him down. Lou simply smiled in return, to which Toki replied with a grin she never ends a conversation after being outsmarted and that the two would be seeing each other again.