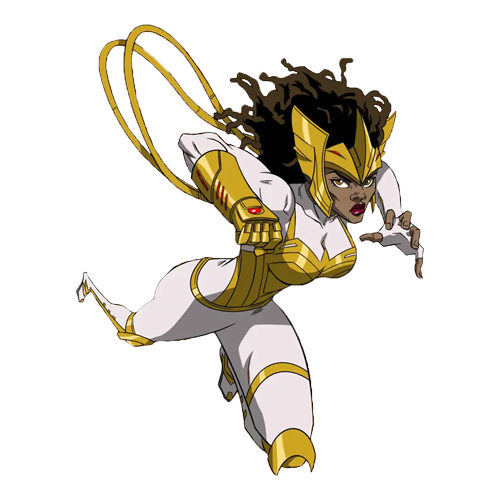 Tessa Oquabay has spent her whole life standing up for the weak and those in need. From the playground to the United Nations, Tessa has fought against those who would seek to take advantage of or bring harm to others. She has dedicated her life to ending corruption, and always keeps the concerns of her people at heart. Thus, it was her destiny to one day obtain office within the political realm of her homeland. Presently, she is the most respected member of the Ethiopian Parliament. Tessa is much more than just a politician, though.

Makeda wears a specialized crown that connects to a right-handed gauntlet, which affords her a number of abilities, including enhanced strength and limited energy projection. She is also trained in several martial arts forms.

Some years back, she began to become overwhelmed by the vast amount of corruption happening across the African continent. Therefore, she began doing extensive diplomatic work all over Africa. This eventually led her to helping with a military crisis in the Democratic Republic of Congo. A vicious warlord, backed by the notorious war criminal Ramses Hondo, was terrorizing the Congolese, and the government sought Tessa to help negotiate peace terms. She agreed to assist, and went to visit the warlord in person. As the two rode in the terrorist leader’s limo, their caravan was attacked by one of the many other rebel groups. The limo was bulletproof, rendering the small firearms useless. The vehicle, however, was not rocket-proof, and a rebel soldier took advantage when he fired off a rocket-propelled grenade! But not just any RPG; the projectile was a hybrid-alien weapon, that had been purchased from Ramses Hondo. The explosion rocked the vehicle, and all of the ground underneath it, and left a massive crater in the ground.

The limo burst into pieces. Miraculously, Tessa survived the blast! However, she began falling through fissures in the earth beneath her, eventually landing deep beneath the surface. The Ambassador was knocked out at first, but when she came to, she realized the hole above her was filled with rocks and dirt. She was trapped and alone, but not dead, and not seriously injured. She began looking for a way out. That was when she discovered she was in an ancient maze of caves, seemingly constructed thousands of years ago. It took some time, but eventually Tessa had masterfully made her way to the center. When she arrived, before her was an incredible artifact. It was an ornate crown, which somehow seemed both ancient and futuristic. It was gold, and had two cybernetic cords attached to a right-handed gauntlet. Tessa was dumbfounded. She wondered how a maze so old could house such advanced technology. This question soon gave way to greater curiosities, though: such as, what the crown and gauntlet were capable of. Alas, a life defining moment was at hand.

Tessa put on the crown and gauntlet without hesitation. Instantly, the cybernetic chords injected themselves into her wrist, and began interfacing with her anatomy, syncing with her brain through the electrical pulses firing between nerve synapses. When the two were calibrated together, Tessa felt a surge of power. She knew something incredible had occurred, and to test herself, she began putting the crown and gauntlet to use.
First, Tessa punched holes through the cave walls, as if she were hitting wet paper bags with scissors in her hands. Then, she noticed a red jewel on the hand, and pressed it. A targeting system was prompted, and two lasers projected from the red jewels in the crown, forming an aiming guide synced with her eyesight. As soon as Tessa realized what was happening, and envisioned an energy blast in her imagination, a real beam of energy shot from the gauntlet into the cave wall, where the red cross-hair was located. Tessa knew she had just obtained great power, and after digging herself out, she immediately got to work on becoming the savior Mother Africa needed.

A few days later, to the surprise of everyone, Tessa returned to Parliament. She did not mention the caves, or the crown and gauntlet, though. She simply accepted everyone’s well-wishes from surviving the chaotic attack, even when the warlord did not. Then, once the excitement surrounding her return died down, Tessa began physically training herself. She was already fit, having been a junior Olympic sprinter in her youth, who never stopped minding her diet and exercise routine. However, this time, her training was on the elite level. She spent many late nights training with a Sensei she’d met through a friend, and began forging her body into a weapon. Tessa also began mastering numerous martial styles, such as boxing, Krav Maga and jiu jitsu. Eventually, Tessa grew into a lethal fighting machine. Coupled with the crown and gauntlet, she revealed herself to Ethiopia as a hero!

Tessa was unstoppable in fighting crime. Now, not only was she working vigorously in parliament on behalf of her people, but she was also aiding the police and Ethiopian military. After a few years, she began doing hero work all throughout the continent. Tessa became a true super-heroine. She took on the name Makeda – named after the Queen of Sheba – and has been wrecking shop on bad guys all over Africa, and the world, ever since.

Thus, when she heard the wonder child called Chineke had gone missing, she tasked herself with finding her. Makeda’s investigation happened to lead her to Ramses’ burning compound in Nigeria just in time. Fortunately, the child had been rescued by the American super soldier, Lt. Rashard Bonds. However, he was now locked in combat with the villainous powerhouse Shanga. The Storm Mistress unleashed a barrage of mystical bolts of energy from her hammer and hit a huge tree, which began to fall toward the child. This forced Lou to retreat, using his advanced speed to stand over Chineke and catch the tree.

His muscles were burning, and he was grunting while telling the girl to move. It was too late, though. Shanga was upon them. That was when Makeda jumped in! The regal heroine hit the villain with an energy blast, before she could land a deathblow with her hammer. Shanga was violently thrown backwards to the ground, as dirt and shattered tree bits settled around the heroes and the child. Makeda asked Lou if he and Chineke were alright. Lou replied, in astonishment, that they were. Chineke’s eyes opened wide in awe. Makeda was one of her idols, and the reason why she traveled Nigeria helping others. It was a dream come true for Chineke to not only meet her hero, but to also be saved by her.

Meanwhile, after shaking the cobwebs from her head, Shanga stood, and picked up her hammer. Before her were a united Lt. Rashard Bonds and Makeda. Shanga, however, was not detoured. Her mission, unbeknownst to the heroes, was to ensure the delivery of Chineke to the evil geniuses at Universal Intelligence, by direct order of ruthless business moguls Edgar Lockhart and Reina Valencia. Shanga knew she could not return empty-handed. So, she charged up her hammer and rushed right back into battle…