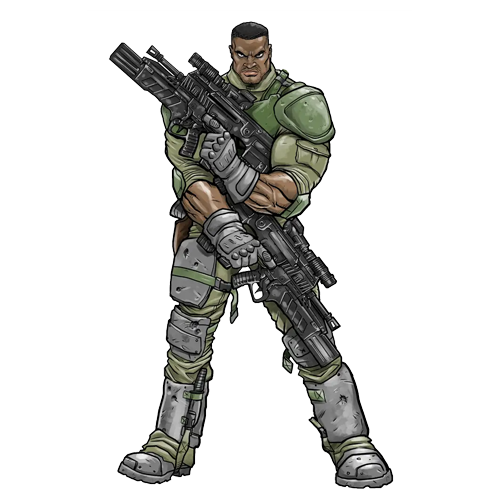 Rashard Bonds was born and raised in the notorious neighborhood of Englewood in Chicago. It was riddled with gang activity his whole life. This meant that he often experienced watching his family and friends become fatal victims of crime and violence. He did not let that deter him from overcoming any obstacles, though. Rashard excelled in school and sports. However, instead of accepting one of the numerous collegiate scholarships he was offered, he opted to enlist in the army instead.

Lt. Rashard Bonds has nanocell technology throughout his entire body from telepathic cells, giving him enhanced strength, speed, agility and healing. His muscles and skeleton have all been reinforced with a lightweight polycarbonate material, giving him enhanced durability as well. In addition, he has psionic energy flowing throughout the inside of his body, which gives him advanced control of his entire being, and a psionic barrier around his brain, making him impervious to telepathy.

While in service, he not only earned his Bachelor’s degree in history, but he also became one of the greatest soldiers the US had ever seen. His record was exemplary. He saved dozens of his fellow soldiers, and successfully completed impossible, solo black-ops missions. His name became synonymous with legend. It was for that reason he was chosen to lead a top secret group of soldiers called the “Alpha Initiative”. It was a unit comprised of the country’s best soldiers, and they were outfitted with a brand new nanotechnology developed by Universal Intelligence, one of the top biotech companies in the world.

The soldiers were all injected with nano cells, and their entire cellular structure became replaced by them. Each cell was replicated from a combination of DNA strands harvested from the world’s greatest telepaths, allowing the cells to communicate and collaborate with the entire body in ways never seen before, ultimately giving the soldiers enhanced physical capabilities and healing powers. In addition, all of the soldiers had a revolutionary carbon fiber material grafted to their skeletal and muscular systems. This made them even more enhanced in strength, speed, agility and durability.

Lt. Rashard Bonds and the Alpha Initiative were unstoppable. Covert mission after covert mission, they single-handedly brought down terrorist regimes and toppled oppressive governments. That was until one fateful day, when the members of the Alpha Initiative began going rogue; all, except Lt. Rashard Bonds. He had just returned from a solo mission in Nigeria where he engaged a phenomenal telepath, so the fact his friends were AWOL was shocking to him, as he was not present to witness their betrayal. Nevertheless, with no other recourse, the US army tasked Rashard with ending the lives of all the team members. He refused at first, but when he continued to see his former comrades committing war atrocities, he knew he had no choice. Alas, Lt. Rashard Bonds eliminated his former friends one by one, until they were all dead.

The guilt of losing his Alpha Initiative family by his own hand haunted him, so when he heard that the Hero of Heroes, Captain Noble was missing, he made up his mind to do whatever it took to find him. Captain Noble, an extremely powerful hyper-being, had been working with the US government for just over a decade, when an insane chain of events culminated in a series of battles with the wormhole witch known as Fata Morgana. The young hero Shuttershock was with Noble during these battles that spanned throughout the galaxy and the multiverse because of Fata’s penchant for using teleportation vortexes.

After months of radio silence, Shuttershock finally returned to Earth, with Fata in custody. Captain Noble, however, did not return with him. Shuttershock told Lt. Rashard Bonds that Fata had transported Noble to some unknown world, but it was impossible for him to know where they had gone. And Fata could not be questioned, for she was in a coma after being knocked out during her final battle with Shuttershock.

Lt. Bonds knew it was up to him to figure out a way to find Captain Noble; and he surmised the best way to do so was to gather a team similar to that of the original “Alpha Initiative.” In fact, Bonds and Noble had discussed the formation of a new team on numerous occasions. Now it was time to put that in action.

But first things first, Bonds had to deliver Fata to a secret United Nations detention center of hyper-beings called “The Enclosure.” It is located in the most isolated place in the world: Tristan da Cunha. The nearest land is about 1,200 miles away, and with no airport, all travel must be done by sea. Any criminal with a hyper-ability is sentenced to imprisonment at this facility, as most jail cells are fully equipped with “Ebb cube technology,” which was developed with the help of the power-muting hyper-human, Vivian “Ebb” Valenzuela. While the primary use of the tech is prisoner detainment, it has been used in several diplomatic situations, like the time Captain Noble needed to contain the teleporting book ninja, Cliché, in order to strike a deal with the dangerous and powerful Sir Vellichor.

The prisoners of the Enclosure are also on 23-hour lockdown, 7 days a week. The one hour a day they get outside of their cells is split between rec time and shower time. While they are free, they are forced to wear Ebb-tech handcuffs, which emit a pulse of energy, replicating Ebb’s ability to mute virtually all of a hyper-being’s power. The super-powered prisoners are no more than common crooks in The Enclosure.

As Lt. Bonds escorted the pod that held the unconscious Fata Morgana to her cell, he was taunted by a number of the inmates, namely Hysteria, the former leader of the villainous group of women called The Disturbed. The three of them were serving consecutive life sentences for their roles in the Smash and Grab heists. Bonds kept a no-nonsense scowl on his face, but honestly, the vile thrown his way by the Enclosure’s residence invigorated him with a rush of adrenaline. It made him all the more eager to get on with the mission of finding Captain Noble.

After securing Fata in her Ebb-cell, and commanding the warden to contact him immediately if and when she ever awoke, Lt. Bonds boarded an advanced high-speed US Navy transport vessel, and headed back to D.C. As the craft moved over the water, Lt. Bonds accessed the CIA Hyper-Files, and began researching viable candidates he could potentially recruit to form a team of superheroes, to assist in the mission to recover Captain Noble, and beyond.